Hi Folks. I've had a stressful week dealing with Bear business. The Bear has had a lot going on. He was sent a letter by the housing association telling him the development where he lives will be refurbished and he will have to temporarily move out for this to happen. He has been very stressed over this. The letter gave no specifics but a couple of phone calls later I found out that they don't have any schedule for works yet but it will start later this year. I will try to negotiate a single move for him rather than moving out for 3 months and then back, because I'm not sure he will stand the strain otherwise. Only problem is that all the other residents are also eldery, mentally ill or physically handicapped so many of them can't cope with it either, so whether they will see him as a priority for a single move I don't know.

Then there is The Form (nothing to do with his housing). A whole booklet of questions to fill in for him. I spent over 2 hours on my own filling out answers on a practice form. I know most of the answers having known him intimately for 9 years. But some I wasn't sure, so we had over an hour together going through the practice form filling in the blanks. Then he had to write it out himself on the real form. The Bear has a slight spelling disability (his reading is not affected, only spelling), and I was getting very worried after about 2 pages of spelling out every other word for him. I said to the Bear, "This is as bad as pulling teeth"... then reconsidered, "OK, not quite as bad as that".

Mercifully after that his engine seemed to be running better and I was only spelling out every 4th or 5th word. Anyway, they will be used to any amount of terrible spelling so a few errors aren't really a problem. The Bear put in a stonking performance and we were through it in 2 1/2 hours - I thought it would take about 4! He can't have done that much writing in a very long time. The *bears* then cheekily asked him what the subject of his next book would be!

So after over 6 hours of work the next stage was to get it signed by the doctor which duly took place on Thursday when I accompanied him at his request. It's a long time since I accompanied the Bear on an app and I was apprehensive because sometimes he makes over the top demands or gets unreasonable. But this time it went OK. I asked for him to be referred for a CPN because I can't handle all the work and support involved with him moving. I had to go back the next day to collect the damn form.

It still needs a couple of sections writing in which I will have to do this weekend so it can be sent off early next week. I think we'll be glad to see the back of it!

I've seen the Bear on 3 days this week and he was surprisingly good tempered throughout. Which is practically unheard of. I was seriously stressed over it all, mainly the anticipation, though it turned out OK. The previous 2 weeks I had found him very draining due to his stress over the housing thing. I have been selfishly so grateful not to be Mrs Bear at this time. Although it has to be said I'm grateful on an average day not to be Mrs Bear. But recently they have been having some very nasty arguments (purely due to stress) and he has been thinking about splitting up with her. I think this would be a very bad idea - esp for me! Admitedly I think he has had this idea in his head for a little while now. The giveaway was when he learnt how to use the microwave.

Other indicators are talking about "doing something" with his hair, and losing some weight. He wants to look his best if he's going to be on the pull. He stopped dying his hair and long white-grey hair doesn't look too hot, so he told me he's thinking of getting a short cut - the name George Clooney was indeed mentioned. I think it will look quite distinguished. The *bears* say that "fur length" hair is just the thing this season so they're all for it.

The weight loss has occured mainly due to his teeth being painful and then subsequently worrying about catching the gum while it was healing. The last couple of years he has looked like he had the most enormous beach ball shoved up his jumper. Now it just looks like a small beach ball.

The big news apart from all this is that The Bear is Broody!!!! Yes really! Which is slightly another nail in the coffin of the current arrangement as she can't have them. I said, "At your time of life?" and he said that he'd reached the stage of life where you consider if you should have a baby before it's too late. (I might add that he does already have a grown up son only 2 years younger than me. But they haven't been in touch for a long time due to getting divorced when his son was still a small child.) Whether he is really serious or just using it as another thing against her, I'm not sure.

Well, that's been a big chunk of Bear hasn't it? What about me? Eating wise I haven't been doing too great this week. I have eaten my stress at several times during the week, although pulled back yesterday and today. On the up side I have been very physically active the last 5 days doing plenty of walking. Up the very big hill to my healer on Monday and walking through town afterwards, Tuesday I went on a walk lasting 1 1/4 hours in the evening, Wed I had 1/2 hour of fast walking going to see my CPN and then another 1/2 hour almost running to get back into town to meet the Bear (dripping in sweat by the time I got there). Thur and Fri I was walking around town with the Bear. He's kept me on my toes anyway!

***
I have tons of photos yet to post, but for today I thought I'd show you a few curiosities.

Elizabethan themed Trompe l'oeil painting on the side of a building on the High Street. 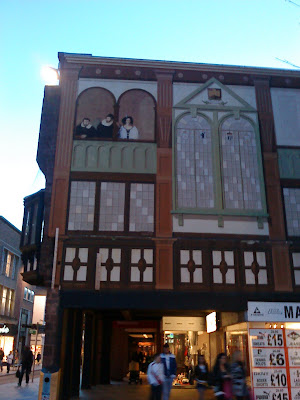 Intricate carving on the doorway of the Cathedral. 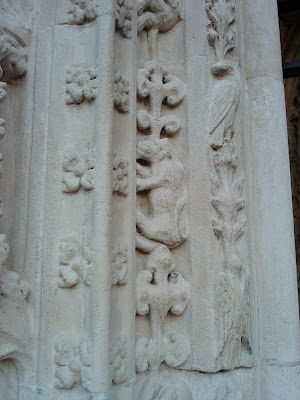 There are many small creatures and birds on the doorway. This little monkey is only half the size of my hand. 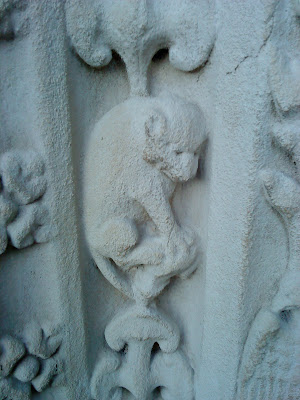 This creature is the same size. Do you think it's a dog? It's got a very bushy tail! 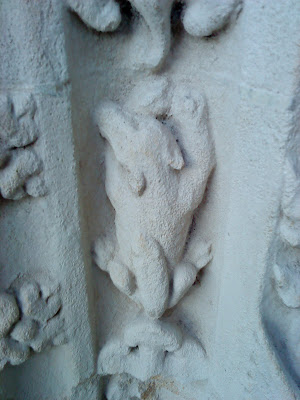 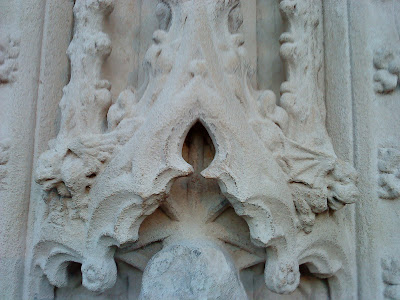 Ancient passageway. The timber framing on the left is Elizabethan, the infilling of bricks is later. 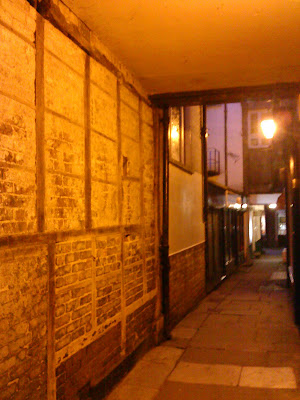 Someone has done a cheeky Banksy style ghetto blaster on some of the infilling! 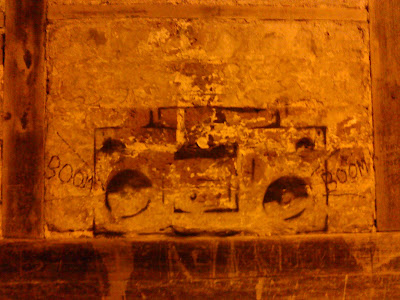 PS Hope you all have a great Valentine's Day tomorrow!
Posted by Friend of the Bear at 14:37