Hi Folks. I got out today, on my own, at just after 3.30pm which is pretty brilliant for me. And I walked round taking photos for over 2 hours. Unfortunately it was overcast and even started hailing at one stage so the atmosphere of the photos is a little grim. Which may cause some of you to wonder why I have called this post Merrie England!

It's because the time when the timber framed buildings below were built is traditionally thought of as good times in our history. Why? Well the black death, otherwise known as bubonic plague, wiped out about a quarter of the population in England in the middle of the 14th century. Before the plague life was very hard with food shortages and much of the population living in serfdom. Landowners were able to set low rates of pay and treat the peasants (labourers) in any way they pleased. The peasants were not free, they were serfs in that the landowners could make demands on them they could not refuse. After the plague the shortage of labour pushed wages up, there was enough food for everyone, and plenty of abandoned land for individuals to take over and work for themselves. The absolute power of the landowners was broken and the feudal system was all but over by the end of the 14th century. The peasants had never had it so good (to coin Macmillan's phrase).

The plague gave those left alive the opportunity to prosper, work for themselves and generally make merry.

These are some timber framed buildings from the 15th century. The timber used is oak which naturally ages to a dark grey colour. The infilling would originally have been wattle and daub - woven wooden panels which were covered in a mixture of earth, straw, animal hair, clay, sand and possibly even some dung thrown in! Now of course, although the original wattle (woven panels) may still be there, the daub has been replaced with plaster - more durable and probably smells better!

The pathway up the hill is medieval being made more of pebbles than cobbles. There's also an old gas lamp now converted to electricity. Many original gas lamps can be seen around the city (you'll have seen them on other photos of mine) as this was one of the first places in England to have gas light - in 1815. I went down this way to call in at the charity bookshop seen here on the right. On the left, the shop is a business owned by one of the Bear's sisters! The stone supports on which the first floor currently stands were put in at a later date presumably to stop the whole thing from collapsing. 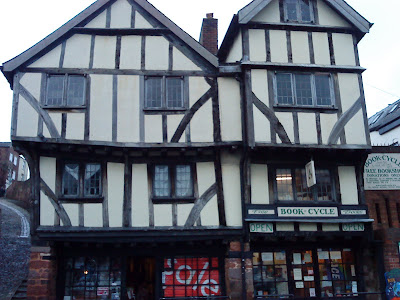 Next door is a beautiful church built in the 15th century from the local red stone. I should say rebuilt as there has been a church on that spot since the 12th century. 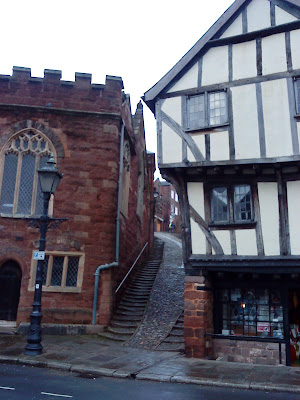 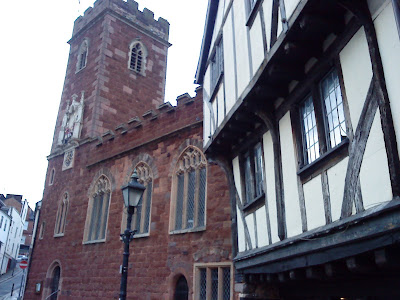 Across the road is another timber framed building where you can see the original ground floor structure. It is called "The House that Moved" because it was moved to that position in 1961 when they built a new road. The whole building, being mainly wood, was rolled about 90 metres to its new position quite easily! It's now a bridal shop. 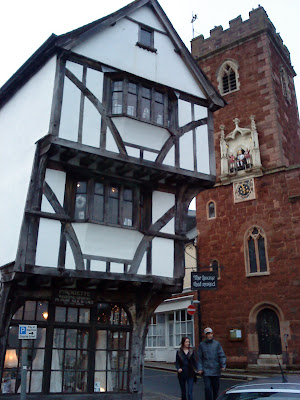 Previously some of the timberwork had been plastered over but this was stripped off revealing the original structure in all its glory. 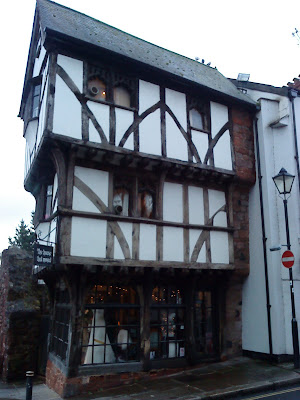 Many wood framed buildings were remodelled in later times. This is an example of a property which has been entirely plastered over but you can still see each storey jutting over the one below. 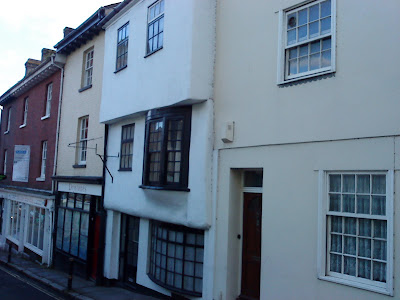 Here is another example of original timber framing on the side of a building. 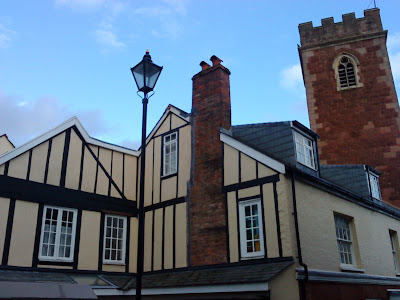 But  the front of that building is entirely Georgian including the perfectly preserved shop front. 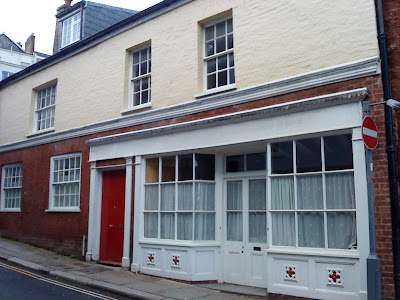 I have many more photos, but to finish today here are some photos of the converted pub from the last post showing the gallery with original pews, the main floor and the bar. 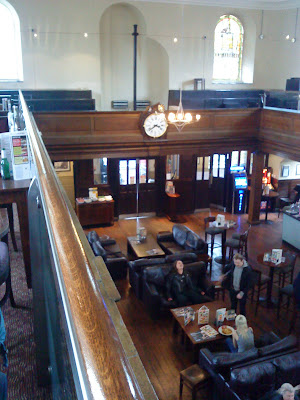 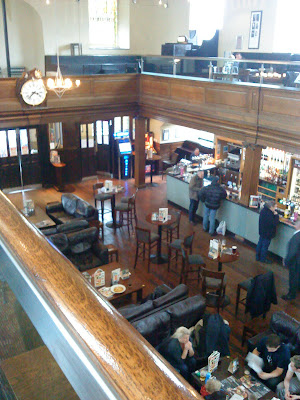 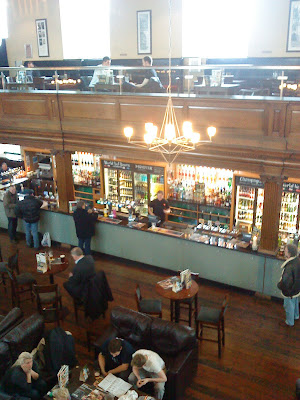 And the Regency gothic chapel next door 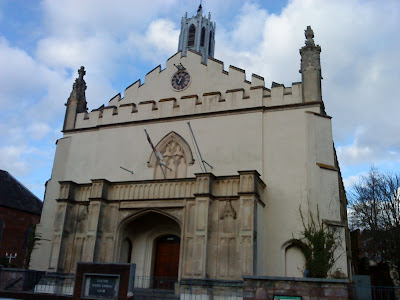 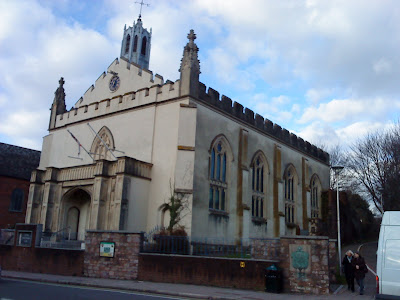