I took this standing on one side of the quay looking right down on top of them. They gathered as I was standing there in hope of food. This was over two weeks ago when the weather was at its coldest and they were desperately hungry. (None of the pics have been edited in any way) 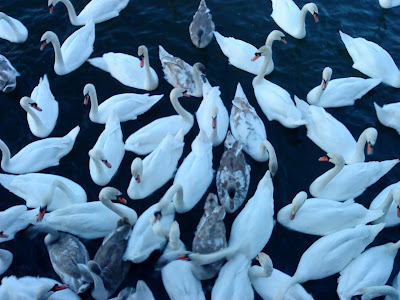 Then they suddenly all started swimming over to the other side - a couple of people had some bread for them. 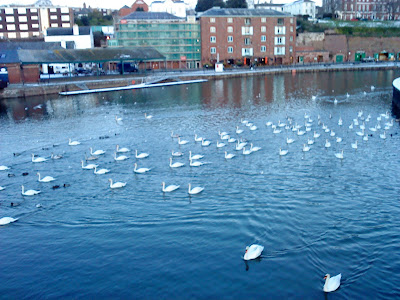 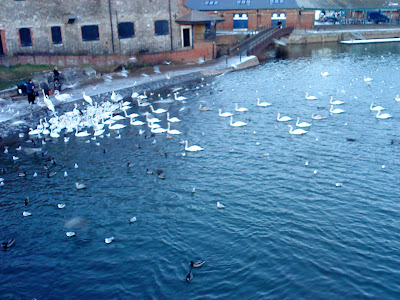 I followed them by walking over the bridge. There were ducks in there as well. The blurry white things above them are seagulls. 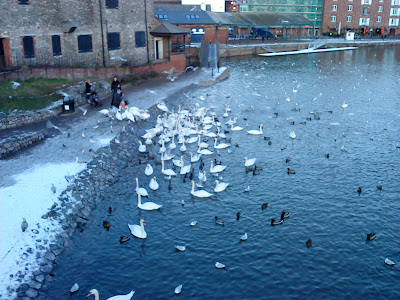 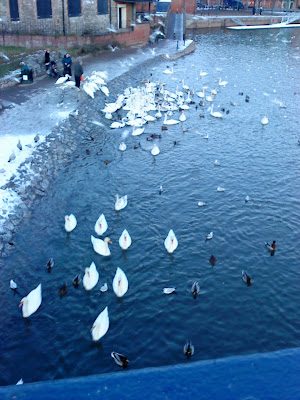 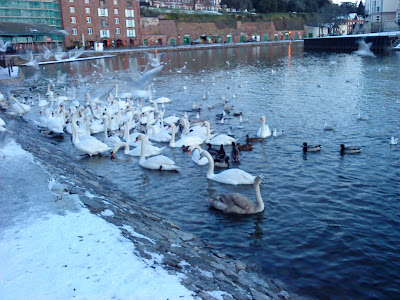 You can just see the little bit of snow that we had. I decided to get right in amongst them. The orange thing in the corner is the carrier bag of the person feeding them. 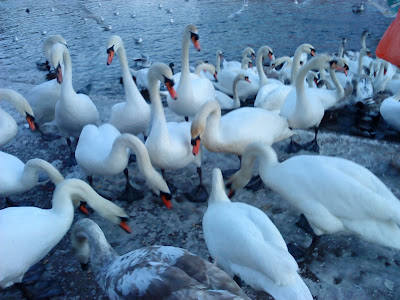 This guy looks a little bashful! 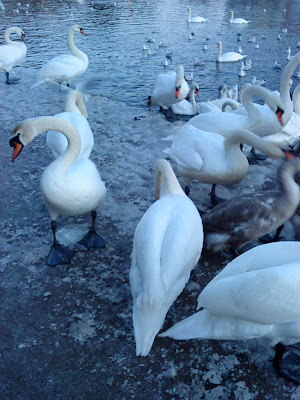 The Bear was with me and on my instruction had brought some bread so I fed them. The Bear put down some museli, and was very miffed when they completely ignored it. Even the seagulls. The Seagulls were a darn nuisance and they swooped on me several times. Strangely I have noticed that both the ducks and seagulls are absent in darkness, so that's the best time to feed the swans. Where do they go at night time? One of lifes great mysteries!

***
On Monday I took the Bear to the emergency dentist. He waited of course until the pain was un-bear-able. I tried to persuade him to go sooner but no. He had to wait until it was an emergency. The *bears* didn't even bother to try with him; they know the score.

The dentist inspired no confidence - in me at least. He was such a will-o-the-wisp he was barely there at all. Very unusual. Most dentists are quite gung-ho. Very much in control of the situation. Projecting strength and calmness. Sometimes an over the top performance, presumably to distract you from the horror of it all. This guy was floating through it so much I was terrified he was going to take the wrong teeth out. Which would have been a disaster considering how few the Bear has left.

Anyway, the Bear is now down 2 teeth. While most people would be upset at the loss, he feels no such qualms. In fact he lied a bit to get two taken out. The canine which was just a stump really did need extracting. The one next door to it would have lasted longer - though how long no-one can tell. And I don't even think it was hurting. Certainly he never mentioned it before that day. But he decided to have it out to save going back.

This is starting to sound a bit horrific. Or if you're in America, possibly you just think this is British dentistry. Really though it is the Bear's unwillingness to go to the dentist.

I have to say that if you are in a *shaky* mental state, it is probably better not to go to the dentist and witness teeth being pulled. Even if they are someone else's. I suffered some moments afterwards when I felt I was going to a bad place again, but managed to pull myself out of it quite swiftly. Lucky I had booked to see my healer later that day which prevented any further problems on that score.

I did ask the Bear if his girlfriend could accompany him but he said no. Of course she needs to see the dentist too. Two of her crowns (on the top at the front - could it be worse?) have fallen out. She is very visibly gappy right now. I cannot understand why she does nothing about it - they only need to be stuck back on/in. The *bears* think a tube of superglue would easily fix it. No doubt I will be taking her to the dentist soon as well. *Sigh*.

***
I have been given two blog awards! This from outdoor mom at Yaak Adventures 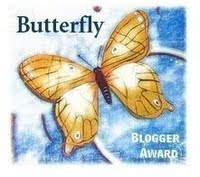 And this one from Sheilagh at Sixty by Sixty 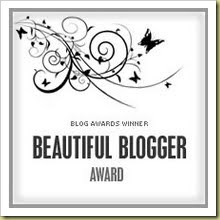 Thank you so much ladies! I totally do not deserve them! I am supposed to tell you 7 things about myself for the latter, but this post is long enough already so I'll leave it until next time.

I am still catching up with my blog reading, so if I haven't got round to your's, I'll be there soon! Two weeks is a loooong time in blogland so it's taking me a while ...
Posted by Friend of the Bear at 15:25