Snowpeople, a walk through the town, and an Elephant!

When the snow came everyone immediately went out and built a snowman. Obviously. Most snowman are a little chubby. But this guy is in pretty good shape. 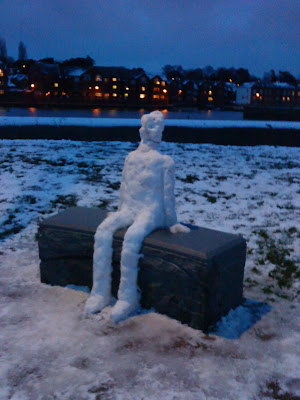 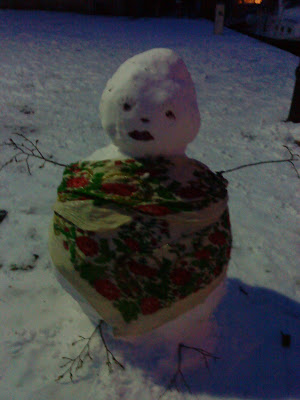 Ever seen a snowlady? You can see her perfect lips and even eyelashes - she's wearing mascara! The scarf was very pretty with roses and gold thread running through it. After the snowlady melted someone put it over a railing. The Bear *snaffled* it for me as a little souvenir!
***
I have been trying to think of 7 things about me for the award I received from Sheilagh. It was bl**dy difficult to dredge anything up!
My favourite film used to be Amadeus. I have watched it a hundred times probably. I don't know what my favourite film is these days.
My favourite drink used to be whisky or Amaretto + Bacardi + orange juice. But these days I prefer just neat Amaretto.
Despite lackadaisical attention to brushing I have no fillings in my teeth. A dentist told me 20 years ago I would never need any fillings and so far he is right. I do have an acid erosion problem though and have had several teeth covered in plastic to prevent further damage.

I make lace - or at least I used to before my hands got bad with psoriasis. Strangely enough, despite all my education, this little hobby (or waste of time as I often think of it) is possibly the biggest chance I have of ever earning any money again. I mean in the sense of teaching it in adult ed classes. Not that the money would be great due to the limited number of hours. I make Bucks Point lace for those in the know. I had also started learning Honiton lace before I had to give it up.

I went to art college before I did my degree. It was very hard work! Probably the hardest most consistent work I have ever done. And done while my mother was dying of cancer, my father had a cancer scare and my family were utterly opposed to me studying art and let me know it at every possible opportunity. Pressure or what?

I need salt! One summer night I was unable to sleep at all. I didn't know what the matter was. At last I got up and went to the salt jar. I ate two teaspoons of salt. I felt my whole body relax and say "Aaaahhhh!" I got back into bed and went straight to sleep.

Most special TV show ever (historical) - Fame! I was allowed to stay up specially late to watch it. I haven't seen it since then so I don't know how I'd find it now. But to me at that time it was My Dream. I've seen the film several times in adulthood but it's a lot sadder than the series.

***
Next time I really must tackle the Elephant in the room - my eating. Am I looking like an elephant? Yes! And I really want to eat better, but so far it hasn't happened. I am slowly making adjustments - eating a proper evening meal to prevent snacking. Trying to make a few better choices. But I am very unhappy with where I am on this. I am overeating, but not bingeing (thankfully) so far this year. My recent mental drop out didn't result in any mad eating. Just too many carbs at every single meal. I have not cared too much what I have been eating or how much. I just ate what I felt like and what I had in. But I am ready for change on this now. Enough bad eating already!

***
Walking through the streets at night. The entrance to Cathedral close with iron bridge dated 1815 connecting a walkway that runs across the top of the medieval city wall (origins of wall are Roman). 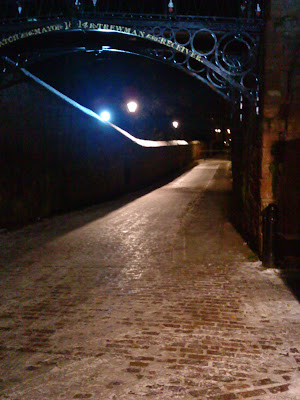 The city centre is built on (1st century) Roman foundations. The city was razed to the ground a thousand years ago and rebuilt by the Normans. But the Roman foundations are still there. The earliest parts of the buildings you can see on the right here are probably 13th century. 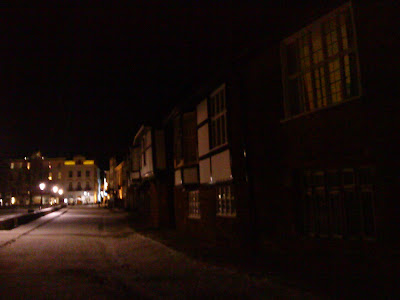 Cathedral built by the Normans in 12th and 13th century. 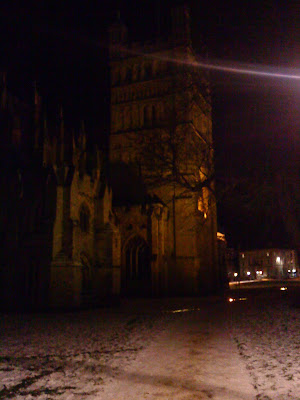 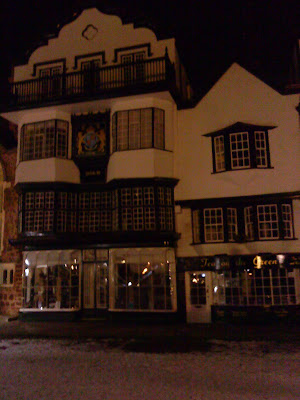 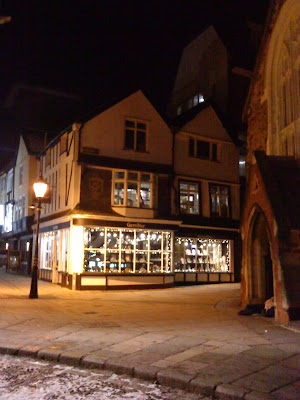 Medieval buildings on the right against Georgian stuccoed splendor on the left. 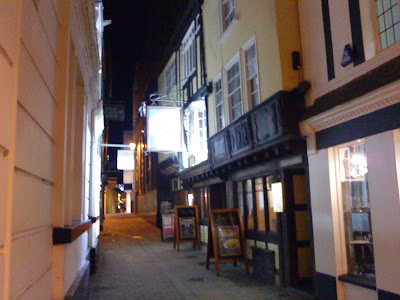