So difficult to write this. I have been ill. I'm not even sure what has happened to me. And that is most unusual. For me not to fully understand what is going on. Usually, whatever state of illness I have been in, I've been able to observe it, analyse and understand it even as I was experiencing it. Some would say this is due to my prior learning, but I think it's as much due to my natural interest in the workings of the mind. I have strangely always enjoyed watching my own psychological process, no matter how distressed I have been. I find it fascinating, exciting even, to see the delicate workings of the mind unfolding. To see the usual pathways diverted. To feel what fragmentation feels like compared to wholeness. To see what is underneath the usual psychological set up. What is at the root of all of us, in other words.

But this last couple of weeks has been different. Blank. Numb. Shaking and crying. Unable to cope with anything or even think too much.

I'm not sure what to make of it. Hell, if I'm going to be mentally ill, I at least want it to be interesting. This has just been tediously boring.

I think it has been severe anxiety. Overwhelming. For what reason? Anxiety about the future.

I KNOW, I KNOW. If I could just stop worrying about the future, I'd actually be able to have a life right now.

But the fact is that I do need to make plans for the future and be able to see a way ahead from here. But every time I do that I just come up against this terrible anxiety until I give up on it. Not being able to make plans and change things over the last few years for this very reason has meant that I have been "stuck"; unable to move forward with my life. You might say, well life carries on anyway, whatever plans anyone makes - which is true of course. I'm still alive despite having no forward plans. But in order to have a life which is worth living I need desperately to make changes, and that requires planning, which is where I fall apart. Even on the planning.

Most people in reasonable mental health can at least do the planning stage, though many will not get further than that of course. It takes guts to make changes. Most can plan to leave a bad relationship, change their job, start their own business, blimey, even eat better and get some exercise! How many will actually carry it through? Most, not until it gets really desperate. I suppose that a lot of the time we are consoling ourselves with our plans, even when we feel unable to act of them. The consolation of the diet starting on Monday, or after whatever holiday it is. I will leave him when the kids are ___ age. I will start my own business after this recession/ when I have paid x% off the mortgage. So I'm not even getting the consolation. On the other hand these rationalisations allow us to carry on as we are. It means we can put off change for another day.

I have been putting off change for many years now. Of course, at times I have really been too ill to make significant change. At other times, circumstances have made the changes that I wanted impossible.

But generally, if I am being honest with myself, change of some sort has ALWAYS been possbible.

So my mission at the moment is to see change in a more positive light, so it doesn't scare the sh*t out of me.


Thank you so much to those people who have lefts comments and sent emails worried about where I am and what has happened to me. Thank you for caring so much and sticking with me. I hope to catch up with you all soon. I haven't even signed into blogger or read my email over the last couple of weeks. But, hopefully normal service will be resumed very soon.

The only light in my life recently has been the snow! Do these photos look cold enough or what? They have not been put through a filter or anything. They were taken in the park by the river. The huts on the other side of the river are the allotments. 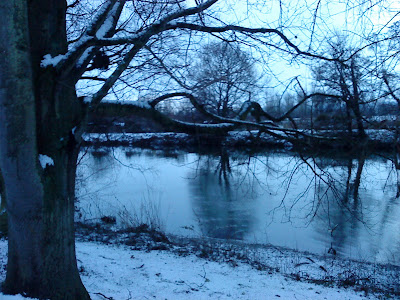 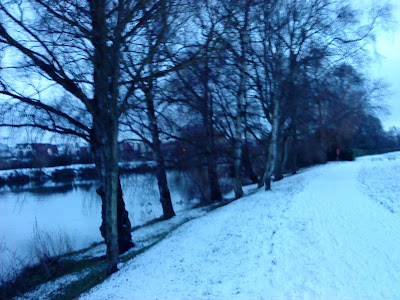 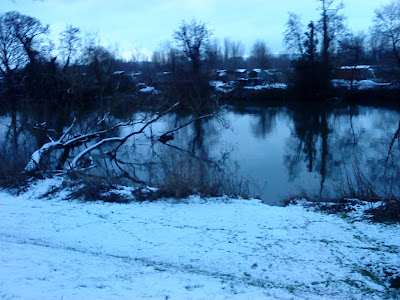 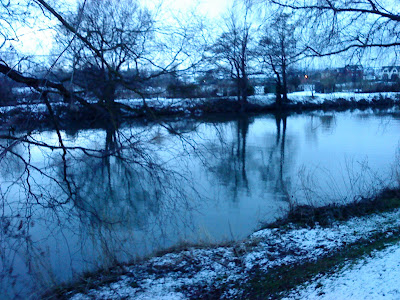 Once again, thank you friends. I'll be visiting you all soon ....