An unfortunate incident and the 1000yr old house

An unfortunate incident occurred today. I went out to meet the Bear in town. I wasn't feeling too great before I set out but as I left the house I felt OK. It was a very sunny day and the Bear wanted to walk to the university grounds to take photos of any flowers or blossom that might be out.

I arrived at the square behind the high street - where the church ruins are that I showed you a while back - and perched on a wall to wait for him. This may have been my mistake. To sit down. Maybe if I'd kept moving I would have been OK.

After a few minutes he arrived and we chatted about where he had been that day and then my blood pressure went. I suddenly went hot and had that certain feeling that precedes part of my vision going black which is swiftly followed by unconsciousness. I immediately bent over my bag that was on the wall at the side of me. Getting down before I fall down is the name of the game in this situation. If I had blacked out I would have hit my head on a very hard granite wall or pavement. I ended up actually lying on top of the wall for about an hour feeling very ill and trying in vain to get my blood pressure up. I felt fairly desperate at the time as it was quite a long time to be unable to get up, and was starting to think that it was going to be an ambulance job - and indeed a group of workers at Dingles (House of Fraser department store) who were on their ciggie break nearby kept coming up and asking the Bear if we needed an ambulance calling. I suppose it was very nice of them to offer their concern (or maybe they thought it'd be bad for business if someone died just outside their store!) but at the time it was embarrassing esp for the Bear who had to keep explaining it was just my blood pressure.

I was lucky the Bear was there because it would certainly have been a hell of a lot worse if I'd been on my own. I would have been very vulnerable lying there on my own. Although someone would have called the police or an ambulance or both. The Bear rose to the occasion surprisingly and uncharacteristically well - going to the nearby outdoor cafe and getting some salt at my instruction - I usually carry some myself. But it didn't work this time. Then later when I felt fractionally better he went and got me a diet coke - I thought the caffeine might pick me up a bit. And he put a reassuring paw on my sizeable rump to stop me toppling off the wall and onto the flowerbed on the other side of it! Fat girl lying on top of a narrow wall - it must have been a fairly ridiculous sight!

The whole scenario was grimness itself. Usually getting my head and feet on the same level returns some blood to my head - although raising my feet above my head is the best position - but it wasn't possible in this situation. Still a whole hour unable to move. My body's going hardcore on me over this. It's saying enough is enough. We can take no more. This is my body's extreme stress response. While most people go into "flight or fight", I just keel over - the "injury response" as it's known. The body slowing the flow of blood so that less blood is lost from a wound. But of course there is no injury. Except when I crack my head on the floor.

Blood pressure can be deliberately manipulated. And sometimes by intense effort I can achieve this - but I failed miserably on this occasion.

If anyone knows an innovative way of raising blood pressure please let me know. I say innovative because I'm already doing all the sure fire techniques of being fat, eating plenty of salt and hardly getting any exercise, but it's just not helping at all. (Weight is not a factor in low blood pressure just in case anyone might think so.)

Finally, I was, by some miracle able to get up off the wall and the Bear walked me home. And now, many hours later I only feel mildly sick.

I really hope everyone else has had (or is having) a better day than I've had!
***
Some pictures of an almost 1000 year old house - which is now owned by the council - I wasn't peeking into private property! I took these photos quite a while back through one of the windows. It is situated on a quiet pedestrian alleyway. 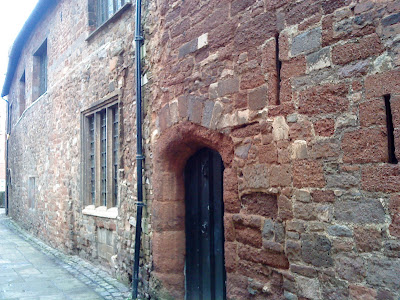 The interior decor dates to the 1500s when the property went into private ownership - it was a monastery before that - but Henry VIII - he of the 6 wives - did away with the monasteries. The walls are covered in intricately painted panelling (obviously restored as it's very bright). 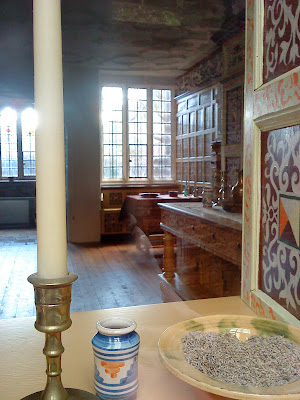 Close up on the panelling. 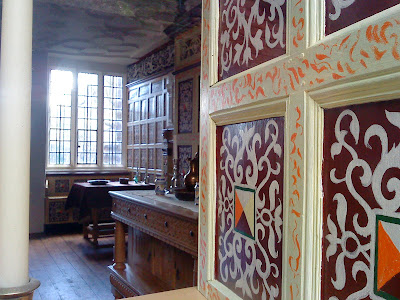 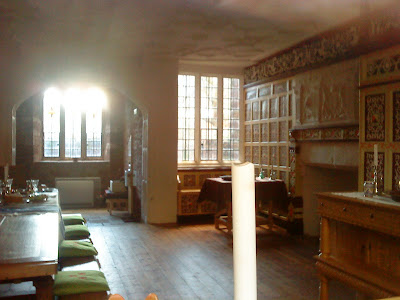 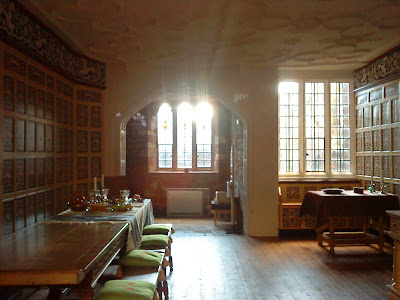 The pane of glass I took the photos through was obviously a more modern replacement. But many panes of glass in that window are very old with many imperfections (which are actually elongated trapped air bubbles) as you can see in this close up. 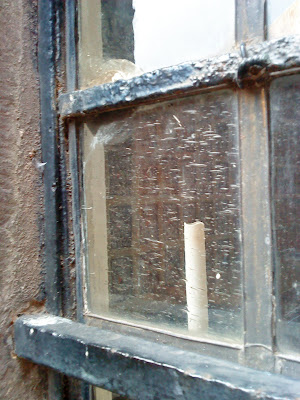 ***
Thank you for all your sweet comments to the previous post. I really hope to catch up with all of you on your blogs very soon.
Posted by Friend of the Bear at 19:11